Get On The Bus

The prison system was designed to punish men. It’s activities, policies and regulations were developed in response to male-models of behavior, morality and rehabilitation. When mandatory drug sentencing laws were passed in the 1970’s and 1980’s, the number of women serving prison sentences doubled. Despite increased female representation in the prison population, the system did not evolve to address the family crises that were created when the laws changed. No one seemed to comprehend that more women in prison would result in more children abandoned to foster care or out-of-home kinship care placements. No one predicted that deconstructing families would result in higher rates of recidivism for female offenders and higher rates of juvenile delinquency for their children. No one considered the children.

In 1998, Women and Criminal Justice, a group of activists concerned with the plight of women in prison, formed a delegation of representatives from churches and faith-based organizations from across the state to visit women living at the prison. The purpose of the delegation was to listen and learn in order to surface the needs from the women themselves in order to allow future action to evolve from the grassroots. During the visit, prisoners and delegates sat side-by-side in a large circle as the women shared their stories and struggles. Time and time again, the women expressed that their greatest source of sadness and anxiety was the separation from their children. Most reported that they had not seen their children since they had been sentenced. For some, it had been over five years: five years of missed birthdays; five years of growth and change; five years of children living without their mothers.

Following the delegation, Women and Criminal Justice immediately began approaching prison officials and families to find out why children weren’t brought for visits. What they quickly discovered was that family separation was not created by a lack of will, but instead by a lack of resources, and the location of prisons far away from urban centers. Families simply could not afford to visit their mothers.

Chowchilla is five hours one way by car from Los Angeles, three hours from the Bay Area, and nine hours from San Diego. Unfortunately, “by car” is not an option for the families of the women participating in the delegation. The vast majority of the children identified for a visit live with maternal grandmothers, who are struggling with poverty, poor health and transportation issues. The cost of three bus tickets (one grandmother and two children) from Los Angeles to Chowchilla is over $150.00 and entails 18 hours of travel time. This does not include the cost of meals, nor the overnight accommodations necessitated by the length of the trip. It’s the classic “double-whammy” so often encountered by the economically poor: mom is sentenced to a prison more than 150 miles away; the cost of a visit is more than the family’s food budget for an entire month.

The leaders of Women In Criminal Justice realized it was time
to find some wheels. 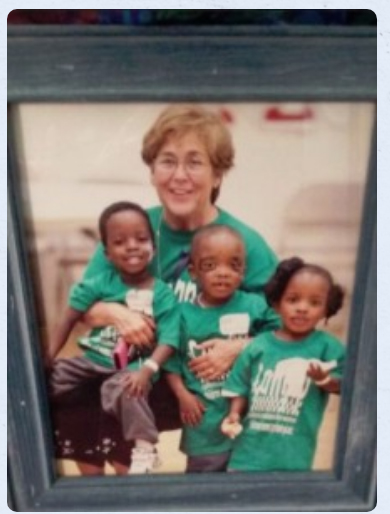 Sr. Suzanne and children from one of the 1st families of Get On The Bus, 1999.

Get On The Bus was framed by Women and Criminal Justice, but brought to life by Sr. Suzanne Steffen, CSJ, who volunteered to serve as its first director. In 1999, Sr. Steffen coordinated a bus that traveled from Los Angeles to the prisons in Chowchilla. In that first year there were 15 children on the bus. Today, Get On The Bus fills more than 47 buses with 943 children from all over California to visit their mothers on the Friday before Mothers Day. In 2006, the program started to bring children to visit their fathers in prison for Father’s Day. Our events not only unites families, but also informs the public of the devastation that occurs when a parent is sent to prison. A mother is still a mother to her child, a father is still a father to his child even though they are separated by miles and prison walls.

Providing transportation is an important service to alleviate separation, but we would prefer change in sentencing laws that would eliminate mandatory minimum sentences for non-violent offenses and create community-based alternatives to incarceration for women with dependent children. By demonstrating the devastating social and economic circumstances that result when families are torn apart by incarceration, Get On The Bus serves as a key point of entry for education, activism, and collaboration. If hundreds of individuals can work together to fund and fill buses with children, then those same individuals can be inspired and empowered to work together to create a powerful voice for reform.

Fill out my online form.